You are here: Home » Clubs and Groups » Heritage Group

In 2005 a survey was carried out by Bunwell Parish Council to discover how the community felt about their village and how they would like it to develop in the future. One of the outcomes of that survey was a feeling that as well as planning for the future, an effort should be made to record the history of the village for future generations.

The Bunwell Heritage Group was formed to tackle that task which was completed in 2017 with the publication of the second book of their two-volume history of the village. The Group’s mission was to research from prime sources and produce fully a referenced work to an academic standard but in a style suitable for the general reader.

The two books are published in hard-cover format with full colour dust sheets, each comprising some 280 pages and 160 illustrations. The referencing and extensive indices makes them a valuable resource for historians and genealogists. 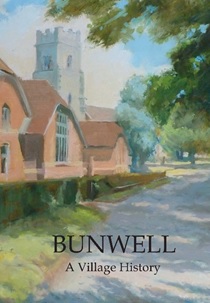 This book chronicles the circumstances and events that governed the lives of the parishioners from pre-history until the end of the twentieth century. The writers have drawn on archaeological evidence; manorial, church and public records; and the memories and memorabilia of the villagers to construct a thematically organised history of the village.

Agriculture, agricultural engineering, building, brickmaking, and the manufacture of ginger beer have all, at various times, provided employment. Locally brewed ale kept the working man from poisoning himself with the water, and the later beer houses and public houses provided social centres no longer available at the newly reformed Protestant Church. Until the nineteenth century Bunwell was largely self-sufficient and all the six hamlets within the parish had at least one general store. All the public houses and all but one of the shops have since become private houses or been demolished. The writers describe these enterprises and the villagers that owned or were employed by them.

Two chapters are devoted to those who fought in the two world wars and to those that had to stay behind to look after the land. A closing chapter discusses the origins and history of some family surnames associated with the village. The 169 maps, tables and illustrations, together with a catalogue of all known postcards of the village, make what is an academic history easily accessible to the general reader. 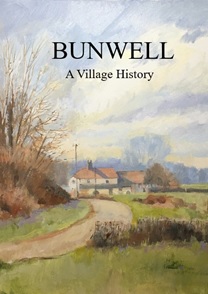 In this second volume the writers continue to construct their thematically organised history of the village, this time concentrating on the social rather than the commercial aspects of village life.

However some narratives begun in the first volume needed to be completed and the book opens with chapters on post-invasion archaeology and coinage found in the village. How St Michael’s negotiated the dictates of the Catholics, Protestants and Puritans and its eventual reforming by the Oxford Movement is discussed as is the arrival of the nonconformist movements.

Talk of the ‘good old days’ needs to be balanced by the experience of cold classrooms, primitive toilets, scarlet fever and corporal punishment; such was the lot of Bunwell’s schoolchildren in the Victorian era. With family planning meaning little more than having enough children to provide for the parents in their old age, families of ten or more were common.  For most, margins between survival and poverty were thin. Poaching could provide meat for the pot, but was a crime. So were murder, assault, arson, theft and sexual offences; all feature in the book as does the punishment of the transgressors. Whether in poor houses or the workhouse, the parish poor were taken care of but not to an extent that encouraged idleness. Survival was enough. Grinding poverty is a better description.

Before television and social media filled peoples’ leisure hours, social interaction meant gathering in groups to play sport, produce plays, and to organise and attend fetes. The village hall provided a centre for these activities. Events leading up to its construction – the years of the ‘Bunwell Show’ are described. Memories of a Bunwell childhood spent on a farm round off this social revue.

Whilst the intention was to limit the history to two volumes it seemed that the more we dug up the past, the more we discovered. During the 12 years it took to produce this two-volume history we unearthed a mound of information that would not fit into these two books but deserved to be recorded. We are currently working on further publications, but not in this hard cover format. There is more to be said about farming, housing and communications within the parish.

Copies of Volumes One and Two are still available at a cost of £25.00 each. For information e=mail: This email address is being protected from spambots. You need JavaScript enabled to view it.